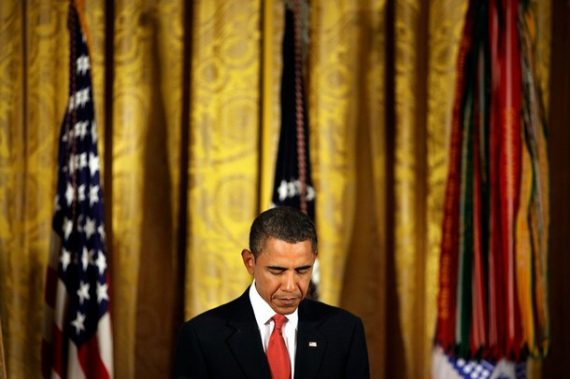 WASHINGTON – SEPTEMBER 17: U.S. President Barack Obama bows his head in prayer during the Medal of Honor ceremony for U.S. Army Sergeant First Class Jared C. Monti in the East Room of the White House September 17, 2009 in Washington, DC. The medal was posthumously awarded to Sgt. Monti, who was killed June 21, 2006 in Afghanistan while attempting to rescue one of his fellow soliders and fighting off an attack from insurgents. The Medal of Honor is given to a soldier “for conspicuous gallantry and intrepidity at the risk of his life above and beyond the call of duty.” (Photo by Chip Somodevilla/Getty Images)