Newsweek has released a new poll and is excited by the huge change: “Glow Fading? The latest NEWSWEEK Poll shows Barack Obama leading John McCain by only 3 points. What a difference a few weeks can make.” This is quite amusing in that pretty much everyone agreed that the June 20th Newsweek poll was an outlier.

No matter. In a Newsweek Web Exclusive, Jonathan Darman explains,

Obama’s rapid drop comes at a strategically challenging moment for the Democratic candidate. Having vanquished Hillary Clinton in early June, Obama quickly went about repositioning himself for a general-election audience–an unpleasant task for any nominee emerging from the pander-heavy primary contests and particularly for a candidate who’d slogged through a vigorous primary challenge in most every contest from January until June. Obama’s reversal on FISA legislation, his support of faith-based initiatives and his decision to opt out of the campaign public-financing system left him open to charges he was a flip-flopper. In the new poll, 53 percent of voters (and 50 percent of former Hillary Clinton supporters) believe that Obama has changed his position on key issues in order to gain political advantage.

More seriously, some Obama supporters worry that the spectacle of their candidate eagerly embracing his old rival, Hillary Clinton, and traveling the country courting big donors at lavish fund-raisers, may have done lasting damage to his image as an arbiter of a new kind of politics. This is a major concern since Obama’s outsider credentials, have, in the past, played a large part in his appeal to moderate, swing voters. In the new poll, McCain leads Obama among independents 41 percent to 34 percent, with 25 percent favoring neither candidate. In June’s NEWSWEEK Poll, Obama bested McCain among independent voters, 48 percent to 36 percent.

He makes a nod toward reality with this:

Obama’s overall decline from the last NEWSWEEK Poll, published June 20, is hard to explain. Many critics questioned whether the Democrat’s advantage over McCain was actually as great as the poll suggested, even though a survey taken during a similar time frame by the Los Angeles Times and Bloomberg showed a similarly large margin. Princeton Survey Research Associates, which conducted the poll for NEWSWEEK, says some of the discrepancy between the two most recent polls may be explained by sampling error.

This is followed by a blithe return to pretending that both Newsweek (or is that NEWSWEEK?) polls are accurate and must reflect real movement. As OTB readers know, the previous poll showed an Obama advantage that was 14.5 percent higher than a RealClearPolitics average that included the outlier poll. How about now?

Well, surprise, surprise! It’s now perfectly in line with what the other polls — only 1.8 percent off the average but right in the flow of the other July polls.

Is the “glow” off of Obama? I’d love to see it. The data, unfortunately, don’t seem to support that conclusion. Here’s a graph of RCP’s McCain-Obama numbers since January:

McCain’s numbers are down slightly since Hillary Clinton’s concession while Obama’s are up a smidgen. (Note: The scale makes the variation look more substantial than it is.) McCain’s numbers have been as high as 47 and as low as 40 whereas Obama’s have fluctuated between 43 and 49. The gap between the two has never exceeded 4 points. So, we’ve got a very close race with very little movement that Obama has been leading, with brief exceptions, for months.

Beyond that, the usual caveats apply: We don’t elect presidents by national vote but state-by-state. We vote in November, not July. Registered voter polls such as Newsweek’s and CNN’s are less reliable than likely voter polls like Rasmussen’s. There’s a possibility that Obama’s numbers are somewhat inflated because people don’t like to admit that they don’t support the black candidate (although recent evidence for that phenomenon is scant).

Many people assumed those values were their own, and without a detailed analysis of his policies and his books, they were unlikely to think they were anything but orthodox liberal. This was, after all, a Democratic primary. So, when Obama did the predictable (although surprisingly clumsy) turn to the right and began to speak in somewhat unprogressive terms on things like the death penalty and faith based programs and FISA and abortion, they felt betrayed. The campaign had actually encouraged them not to know but rather to place their faith in Obama on a personal level.

I’ve been predicting that would happen for, oh, eighteen months now.  But I just don’t see any evidence for it. 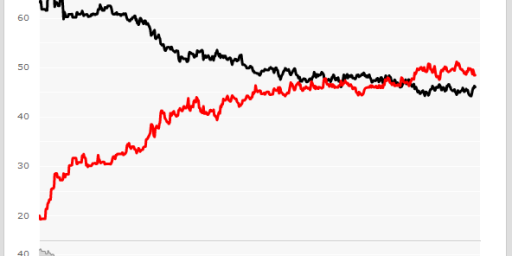