A USA Today report that “Nearly a year after he was elected on a pledge to change business-as-usual in Washington, Obama also has taken a cue from his predecessors and appointed fundraisers to coveted ambassadorships” and in fact has done so at “a rate higher than any president in more than four decades” combined with  story in The Hill that lobbyists are being routinely invited to fundraisers has, unsurprisingly, generated quite a bit of discussion in the blogosphere.

In my New Atlanticist post “Professional Ambassadors Needed,” I argue that “The real issue here isn’t corruption or even Obama’s hypocrisy” but rather “the fact that presidents have the discretion to appoint pretty much whomever they please to more than 5000 senior positions in the government, that vast number of which would be far better filled with career professionals.”

It makes good sense for presidents to appoint loyalists to key advisory and policymaking positions.  The Secretary of State and the National Security Advisor, for example, need to be people the new president trusts implicitly.  Ditto undersecretaries and other senior policymakers and, to a lesser extent, senior positions at NSC, independent policymaking boards, and the like.  There are legitimate partisan and ideological differences in the country and it’s perfectly reasonable that the public policy decision-making apparatus of the Executive Branch be staffed by people who largely agree with the elected president and serve at his pleasure.

Conversely, ambassadors and other working-level positions carry out policy rather than making it.   Professional officers of our foreign, intelligence, and military service (uniformed and civilian, in the case of the latter) can be trusted to faithfully and expertly carry out their orders.

Changing the law on this and drastically cutting back the number of appointed positions (which, practically, would have to be done prospectively, going into effect with Obama’s successor) would greatly improve the efficiency of our government.  Not only would it ensure that these positions are filled by competent professionals rather than enthusiastic amateurs but it would mean that they are filled, period.  We’re nearly a quarter into Obama’s term and a substantial number of these slots remain unfilled.  The process of selecting, vetting, and confirming individuals for such a large number of vacancies is a tremendous drain of resources.

And, yes, I’ve held this view during Republican administrations as well. 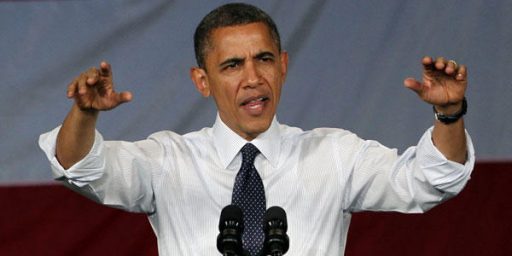