Last night’s Democratic debate featured seven minutes of discussion of Louis Farrakhan’s endorsement of Barack Obama. Despite Obama forthrightly rejecting, denouncing, and otherwise disassociating himself from Farrakhan within the first paragraph of his answer, moderator Tim Russert continued to hammer him with Farrakhan quotes and then allowed Hillary Clinton a couple of minutes to bash Obama with the need to use a word stronger than “renounce.”

Josh Marshall is absolutely right on this one: the introduction of the issue itself was “borderline” and devoting this much time to it was “disgusting.”

I’d differ slightly with Josh, though, in reserving all the criticism for Russert. Clinton should not have played along with this charade and could have won some big-time brownie points for dismissing it as a non-issue and saying that, of course, Obama isn’t a Farrakhan minion.

Contrast that with John McCain’s swift and direct denunciation of a supporter’s “Barack Hussein Obama” crack. To be sure, McCain hasn’t always covered himself in glory on that score in private gatherings with supporters; but he’s been scrupulous about respecting opponents in public forums.

Politics ain’t beanbag, they say, and candidates are sometimes going to make unfair criticisms of their opponents for fundraising, inspiring their supporters, humor, or other reasons. But it’s stupid and counterproductive to try to make hay of controversies that are so obviously off target as the Farrakhan endorsement or Obama’s ‘Muslim clothes,’ or the fact that his middle name happens to be “Hussein.” It amazes me when seasoned politicians don’t seize the high ground even when it comes at no cost and will likely redound to their credit.

UPDATE: Both Andrew Sullivan and Daniel Drezner’s Official Wife thought Obama’s rejection of Farrakhan was too tepid, with Sully terming it “reminiscent of Dukakis.” I’m hardly an Obama fanboy but I just don’t see it. What more was he supposed to say? “I hate that son of a bitch and hope he rots in hell?”

Correction: The original update lumped Dr. and Mrs. Drezner’s reactions together when they were in fact distinct. 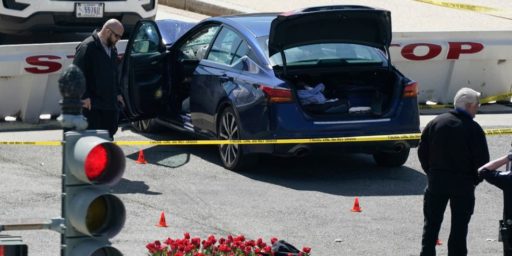