Barack Obama with his grandmother Madelyn Dunham at his high school graduation in 1979. (Photo: Obama for America, via Associated Press)

Sad news this morning:  Barack Obama’s 85-year-old grandmother, Madelyn Dunham, is “gravely ill.”  She “all but raised” him, so it’s an especially devastating situation for Obama.

He’s canceled his Friday campaign stops and is flying to Honolulu Thursday afternoon to see her, and planning to fly back Friday evening and resume campaigning Saturday.  NYT’s Michael Powell says the whole trip will be “more than 36 hours.”  Given that a flight from Indianapolis to Honolulu takes 14-1/2 hours, or 29 hours for the round trip, that’s not much time with his grandmother.

That’s the price of running for president, I guess.  It’s a high one.

To leave the trail at this juncture, when the bell lap is upon both Mr. Obama and his Republican rival, Senator John McCain, carries an element of risk. Mr. Obama is running ahead in every national poll, but his lead in some recent polls is not large.

But Mr. Obama has little family left. His father and mother are dead, along with his grandfather, Stanley Dunham. His grandmother raised him for many years, while his mother lived in Indonesia.

Somehow, I don’t think taking a few hours to say goodbye to his grandmother will hurt his campaign. He’ll likely come to regret taking so little time. The demands of public life at this level, though, leave little time to take care of personal needs. 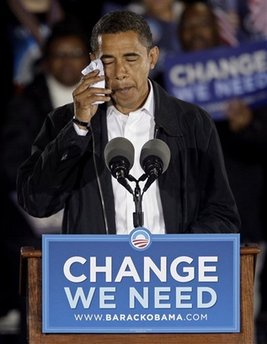