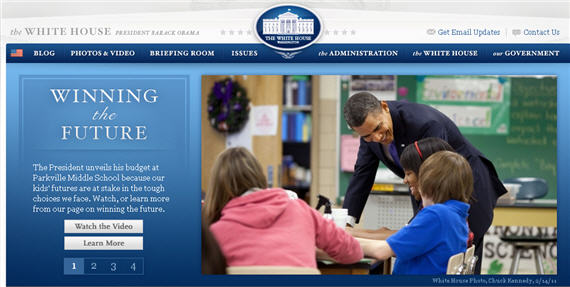 As the 2012 presidential campaign kicks into gear, President Obama’s White House media operation is demonstrating an unprecedented ability to broadcast its message through social media and the Internet, at times doing an end-run around the traditional press.

The White House Press Office now not only produces a website, blog, YouTube channel, Flickr photo stream, and Facebook and Twitter profiles, but also a mix of daily video programming, including live coverage of the president’s appearances and news-like shows that highlight his accomplishments.

But while these innovative communications tools ostensibly offer greater transparency and openness, critics say they have come at a troublesome expense: less accountability of the administration by the independent, mainstream press.

Over the past few months, as White House cameras have been granted free reign behind the scenes, officials have blocked broadcast news outlets from events traditionally open to coverage and limited opportunities to publicly question the president himself.

Obama’s recent signing of the historic New START treaty with Russia and his post-State of the Union cabinet meeting, for example, were both closed to reporters in a break with tradition. And during a recent question and answer session with the president and visiting Canadian Prime Minister Stephen Harper, the White House imposed an unusual limit of just one question each from the U.S. and Canadian press corps.

“The administration has narrowed access by the mainstream media to an unprecedented extent,” said ABC News White House correspondent Ann Compton, who has covered seven administrations. “Access here has shriveled.”

Members of the press have always had quibbles with White House media strategies, calling cut-backs in access an affront to transparency, even as administration officials insist they’re simply taking advantage of new technologies.

But some say the current dynamic is different, and dangerous. “They’re opening the door to kicking the press out of historic events, and opening the door to having a very filtered format for which they give the American public information that doesn’t have any criticism allowed,” said University of Minnesota journalism professor and political communication analyst Heather LaMarre.

“If Nixon had announced he was going to start the ‘Nixon channel’ and said they were only going to put up stuff he approved of, people would have said, ‘Oh my God, this is like Communist Russian state media,'” said David Perlmutter, director of the University of Iowa School of Journalism and Mass Communication.  “But now social media have a friendly face on them, so these media tools are not seen by the public — particularly younger Americans — as some sort of power grab by the president or government,” he said. “They’re just modern ways of reaching out and communicating.”

John Sexton pithily summarizes, “In essence the White House is creating pool reports with itself as the pool reporter.”

There’s an even shorter way of describing this:  propaganda.  Like military coup, another term that has loaded connotations in popular discourse, it actually has a precise and neutral definition in the social science literature. The Dictionary of Political Economy uses this one:

Persuasive communications directed at a specific audience that are designed to influence the targeted audience’s opinions, beliefs and emotions in such a way as to bring about specific, planned alterations in their behavior. The information communicated by the propagandist may be true or false, the values appealed to may be sincerely held by the propagandist or cynically manipulated, and the presentation may be either logically and dispassionately argued or rhetorically tailored to arouse the most irrational emotions and prejudices — but the message content of propaganda is always deliberately selected and slanted to lead the audience toward a predetermined mindset that benefits the cause of the propagandist.

Ironically, this is the flip side of the social media revolution that we’re seeing breaking down state monopoly over information in Egypt and other authoritarian societies. Just as it’s now next to impossible for government to keep the people’s voice from being heard, government can connect directly to the people, bypassing gatekeepers.

American presidents have always tried to do this. George Washington toured the (thankfully much more geographically compact) country via horse and carriage to talk directly to the people. Later presidents would use the telegraph, phonograph, radio, and television to do the same thing.  Franklin Roosevelt’s “fireside chats” remain an iconic example.

In more modern times, Ronald Reagan’s communications team perfected the art of the sound byte, putting the president before the press only briefly and virtually ensuring that they would report his finely tuned message of the day. Bill Clinton famously used Don Imus, Arsenio Hall, and Larry King to go around the rough and tumble political press.

President Obama is the first president to campaign and govern entirely in the age of Twitter and YouTube. His people have mastered the concept.

Why send out press releases to critical journalists when you can put them out directly on your blog? Why let grandstanding interviews question you when you can make your own television shows? Why not send out your own sound bytes via Twitter and Facebook.

For better or worse, the closest Republican analogue right now is Sarah Palin. She gets all the press she wants and controls the message by keeping critical reporters out of her public events and sending out messages via social media. It hasn’t kept people from being critical of her, of course, but it keeps her front and center in the national conversation.

For more perspective on this matter, see these posts from the archives: