President Obama left for a Memorial Day weekend stay in Chicago last night and will be returning to Washington Monday evening, which means that he will be sending Vice-President Biden to the traditional wealth-laying ceremony at the Tomb Of The Unknowns At Arlington National Cemetery:

President Obama is skipping the traditional Memorial Day visit to Arlington National Cemetery, a move that has dismayed some veterans — and comes at a sensitive moment in the administration’s relationship with the military.

Instead of speaking at Arlington, as he did last year and as most presidents have done, Obama will appear at the Abraham Lincoln National Cemetery outside Chicago, the White House said. Vice President Biden will take his place at Arlington, the most prestigious military cemetery in the country and home to Section 60, a large burial ground for soldiers killed in Iraq and Afghanistan.

Paul Rieckhoff, the founder and executive director of the group Iraq and Afghanistan Veterans of America, expressed disappointment at the White House move. “Arlington is hallowed ground, and the center of our nation’s attention on Memorial Day,” Rieckhoff said. “Unfortunately, President Obama and his family will not be there with us.”

Critics — mainly conservatives — have argued that attendance is more important with two wars ongoing. “Obama may talk about the government in the first person, but the men and women lying at Arlington know differently,” commentator Eric Erickson wrote on the conservative site Redstate.com. “Of course, Obama really doesn’t like the military, does he.” Fox News blared the headlines: “Trampling on Tradition?” and “Offensive to Soldiers?”

Erickson isn’t the only conservative who’s made this an issue this week. Over at JammieWearingFool, they called it a “slap in the face to our veterans,” another blogger called it “despicable,” and a third accused the President of having “no respect for the fallen.”

And, of course, Glenn Beck chimed in:

What the critics don’t seem to acknowledge is the fact that the record of Presidential attendance at Arlington over the past thirty years has been quite spotty:

On several occasions in just the last thirty years, U.S. presidents have been elsewhere on Memorial Day (either vacationing or attending to other presidential duties), while other administration officials represented them at the wreath-laying ceremony:

The only President in the last thirty years who attended the Memorial Day services at Arlington every year he was in office was, ironically enough, Bill Clinton.

These facts alone make the criticism ridiculous, but it’s made even more absurd when you take into account that the President will be taking part in a Memorial Day service at the Abraham Lincoln National Cemetery outside Chicago. So the whole “disrespecting the troops” meme that people like Erickson are following on this story is simply false, and stands more as an example of Obama Derangement Syndrome than serious analysis. 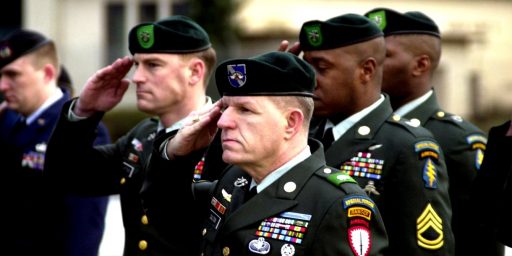