The following headline and picture, currently fronting YahooNews, sums it up:

President Barack Obama arrived in the Gulf, where he stood on Fourchon Beach in his shirt-sleeves and called reporters to the water’s edge to point out some small clumps of oil. The beach, one of the few sandy stretches along the Louisiana coast, was sealed off with crime-scene-style yellow tape.

“These are the tar balls that they’re talking about,” he said. “You can actually send out teams to pick up as they wash on shore.”

Friday’s trip was the president’s second to the coast since the BP-leased oil rig Deepwater Horizon exploded April 20, killing 11 workers and triggering the spill.

He will be briefed in Grand Isle, La., where the beach has been closed since globs of oil started washing up a week ago.

Residents angry and frustrated over the slow pace of efforts to stop the leak did not expect the visit to change much.

“It’s a dog and pony show. What can he really do?” said Billy Ward, 53, who goes to Grand Isle with his family every weekend to stay in their beach house. “If he wants to do something, let him get out there and pump some mud and cement into that hole. Just fix it. Help us.”

So, basically, he’s 1) arrived, 2) will be briefed, and 3) there’s nothing more for him to do.  But there he is, diverting resources that could be more usefully spent doing, well, pretty much anything else.  While BP goes about doing what it was doing regardless:  trying to stop the oil leak.

This isn’t at all a specific criticism of Obama.  He’s doing what is demanded of him and precisely what any other president in my memory would have done under the circumstances.   But it’s just a perfect illustration of the silly cult of the presidency we’ve built. 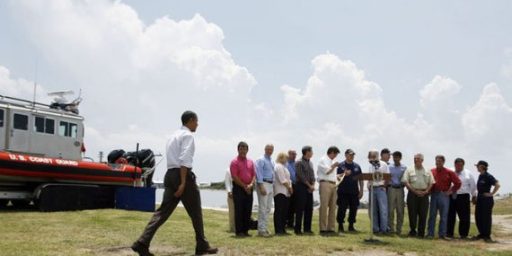 Potemkin Village Cleanup Crews For Obama’s Visit To The Gulf ?