A series of public opinion polls show Barack Obama’s support dropping among Democrats, with Hillary Clinton the obvious beneficiary. While her numbers are static, or even dropping, she’s now ahead of him in several head-to-head polls nationally and has opened up a big lead in Indiana.

The RealClearPolitics average still shows a 1.6 percent Obama lead but that’s entirely a function of including some slightly older polls which have Obama up as much as 8 points.

Democratic voters are not as positive about Barack Obama as they were a month ago. Somewhat smaller percentages of Democrats describe Obama in favorable terms, and he has lost his lead over Hillary Clinton in the race for the Democratic nomination. Nationally, Democratic voters are about evenly divided between Obama and Clinton; Obama holds a slight 47% to 45% edge. In late March, the Illinois senator held a 49% to 39% lead over his New York rival.

The tightening Democratic race reflects a modest but consistent decline in Obama’s personal image rather than improved impressions of Clinton. Fewer Democrats ascribe positive qualities to Obama than did so a month ago, with white working-class Democrats, in particular, expressing more skeptical views of the Illinois senator. Since late February, his unfavorable rating has risen six points among all Democratic and Democratic-leaning voters. At the same time, Clinton’s unfavorable rating among Democratic voters also has increased by seven points.

Clinton’s dropping numbers are a natural function of the relentlessly negative campaign she has run in recent weeks. This, of course, also contributes to Obama’s negatives, along with various gaffes and mini-scandals. Mostly, though, it’s the inevitable decline in the popularity of a candidate who started the race as both incredibly well liked but virtually unknown.

Although Obama’s personal image has eroded modestly, it remains highly positive and surpasses Clinton’s on most dimensions. Large percentages of Democratic voters continue to see him as honest, inspiring, and down-to-earth; however, fewer associated each of these qualities with him – particularly down-to-earth – than did so a month ago. The proportion of Democratic voters who view Obama as down-to-earth has fallen nine points since March and the decline has been even larger among white Democrats with annual incomes of below $50,000 (15 points).

Beyond the small increase in negative opinion about Obama, fewer voters are now using highly complimentary terms to describe their impressions of him. Asked what one word best describes their impression of Obama, “inexperienced” is mentioned most frequently, as in February, but fewer mention Obama’s charisma and intelligence than did so two months ago.

Democrats who have been arguing that Clinton should have dropped out weeks ago and are hurting her party by running a desperation campaign will likely point to these trends as vindication. I’d argue, however, that it’s better to get this sort of thing out of the way in the Spring rather than have the Republicans do it in the Fall. This way, there’s a more realistic baseline and whatever problems emerge will be considered “old news” when it really counts.

The latest Gallup Poll is less dramatic but shows the same trend. In their latest daily tracking poll, “Hillary Clinton has edged ahead of Barack Obama, 49% to 45%.” While within normal statistical variation, “Obama had held a significant lead over Clinton throughout much of April. The current margin is the biggest in Clinton’s favor since March 17-19 polling.”

The trend lines, though, provide some interesting perspective:

The actual variation in Obama’s numbers is slight. More generally, his numbers are way, way up from October whereas Clinton’s have been trending steadily downwards during that period. Granted, much of that is owing to the fact that Clinton started the race as the frontrunner and Obama has benefited from the withdrawal from the race of all the other candidates. Of course, neither the nomination nor the general election are decided by a national vote but rather a series of state contests. Things are also looking up for Clinton there, with next Tuesday’s contest in Indiana the most important. At least one poll there shows her opening up a huge lead:

A statewide poll indicates a dramatic shift of support from Sen. Barack Obama to Sen. Hillary Rodham Clinton ahead of next week’s Indiana Democratic presidential primary — a shift that could be explained by a controversy over Obama’s ex-pastor, the poll’s conductor says.

The survey, conducted by Indianapolis-based TeleResearch Corp. and released exclusively to 6News, showed Clinton with a 10-point lead over Obama in Indiana — 48 percent to 38 percent — with 14 percent of respondents undecided. The survey has a margin of error of plus or minus 3.3 percent.

I don’t know anything about the pollsters here or the reliability of their likely voter screen. That they’re at least using one, though, is a good sign. If Clinton can get a blowout in Indiana, she’ll have a better case than she did a week ago that Obama can’t win in the heartland.

Obama does, apparently, still have a backstop in North Carolina. RealClearPolitics and USA Election Polls have good collections of polls from the Tarheel State. While a handful of polls show it competitive, most show him winning handily. The RCP average has him up 8.4 points and Zogby has him up by a staggering 16 percent. Only Insider Advantage has Clinton leading.

At the end of the day, this is likely academic. While Clinton has a strong case for fighting through the convention, I still don’t see how she wins. Obama has been wounded by Bittergate, Wright, and so forth but probably not seriously enough to cost him the nomination. 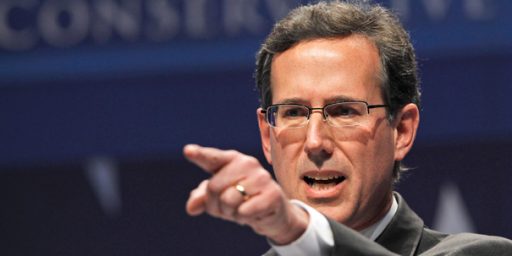