So, Occupy protestors in yet another city thought it would be a good idea to get in front of a car.

So, Occupy protestors in yet another city thought it would be a good idea to get in front of a car. The details are murky but let’s just say that cars have certain advantages over pedestrians in such encounters.

Three people were injured after apparently being struck by a car, authorities said.

Lt. Christopher Micciche of the D.C. police told the Associated Press that the driver was not cited because he had a green light when his vehicle struck three people. He said witnesses told police that the three pedestrians “either ran toward or jumped in front of the moving vehicle.” He said one pedestrian jumped on the hood of the car. One of them was cited for being in the roadway. “The protesters were apparently trying to block the roadway,” Micciche said. “It was essentially an accident where three individuals were injured but they were in violation by being in the roadway.”

The witness accounts provided by the police contradicted the description of the events some protesters gave The Post.

About 500 protesters stood in the streets at half a dozen intersections around the building, preventing cars from coming or going. Several said that their aim was to prevent those inside from leaving.

One the protesters appeared to be struck at the center of the convention center, where M Street bisects the building. Two others were standing near the intersection of New York Avenue and 7th Street NW, according to eyewitnesses.

Earlier, however, near the rear of the convention center, another group of protesters stood in front of a chartered bus for more than a half-hour as it tried to leave from the area. The bus kept honking its horn and tried to advance forward, but was repelled by the protesters who refused to yield.

In other areas around the building, some drivers got out of their cars and confronted protesters who refused to move. Other motorists stuck in traffic were more receptive, honking their horns in support of the group.

Three protesters were hit by a car at 7th and K Streets about 9:50pm local time, myFOXdc.com reported, with two taken to the hospital with non-serious injuries.

Police said the car hit two people, then kept driving, and hit a third person before it was stopped. The driver was in custody, police said.

One woman said she was dragged by the car for a number of feet (meters) and angry protesters swarmed the vehicle yelling “shame,” WJLA-TV reported.

So, it’s not exactly clear whether this was an accident or a frightened or frustrated driver running over protestors blocking his way. Either way, it’s probably a good idea not to try to block a very heavy metal object with the power of dozens of horses with one’s body.

While drivers don’t have a right to run over pedestrians even when said pedestrians are being assholes, neither do pedestrians have a right to block the road. DC drivers are not known for their patience or judgment in any case and putting them in a position where they might run your dumb ass over is simply inadvisable. 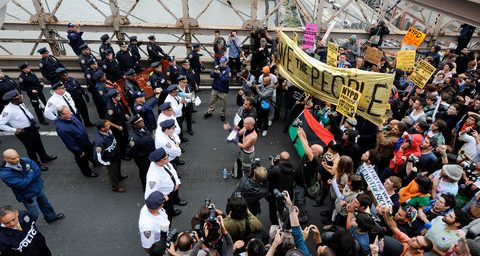