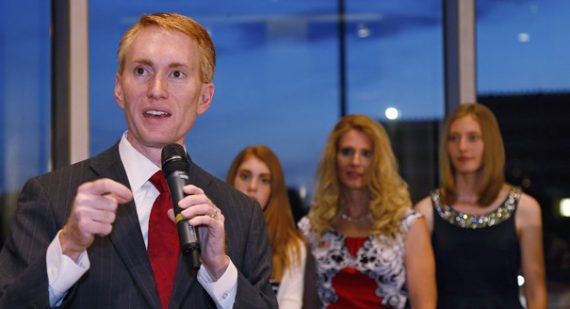 U.S. Rep James Lankford, left, speaks to his supporters at his watch party in Oklahoma City, as his daughters, Jordan, second from left, 14, Hannah, right, 17, and his wife Cindy, stand near, Tuesday, June 24, 2014. Two-term U.S. Rep. James Lankford was able to get the more than 50 percent of the vote necessary to win the GOP nomination for U.S. Sen. Tom Coburn’s seat. Coburn announced in January that he was foregoing his final two years in office after a recurrence of cancer. (AP Photo/Sue Ogrocki)