On Emotional Responses to Violence

First, it is perfectly understandable that people react with great emotions at times of violence, most especially when innocent people are the victims.

Second, however, some emotional responses are offensive and out of bounds, such as those by World Net Daily commentator (and Fox News Contributor), Erik Rush, who tweeted the following yesterday: 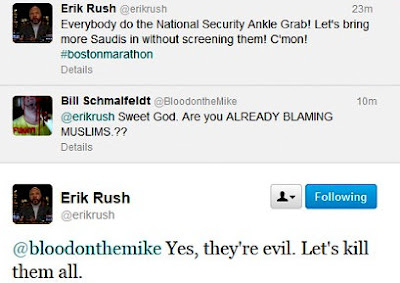 Third, if this response can crop up in the US, after two bombs, three deaths, and scores of injuries, what do we think that 422 drone strikes in Pakistan and Yemen with between 276-268 civilians killed (alongside 200-330 “unknown” killed and 1,969-3,238 militants) might do in terms of emotional responses?  And would not repeated emotional responses likely lead to even more dramatic actions than foolishly and hatefully hitting Twitter?  (BTW, the Tweet has been deleted

Beyond the obvious calculus about cycles of violence, Rush’s Islamophobia is both striking and yet, unfortunately, utterly unsurprising.

(To be honest, given the date, I have to think that the better money is on domestic anti-government types, but time will tell).