One Metric of the Size of Government

Looking at civilian employment in the executive branch since 1940.

Ok, so yesterday I ended up engaged in an interchange on Twitter* over the size of the federal government as based on the number of civilian employees in the executive branch.  This was in the context of how big the government is and it growth over time.  The interchange started, actually, with a rather gross misreading of the chart in a Retweet from one of my Tweeps, about which I commented and corrected.  Ultimately, what struck me about the table was that while a comparison of the first data point in 1940 to the last in 2011 shows a substantial increase (699,000 civilian employees in the executive branch in 1940 to 2.15 million in 2011) the bottom line is that the outlier over the 71 period is 1940, not 2011.  The table can be found here, and here’s a basic line graph of the data: 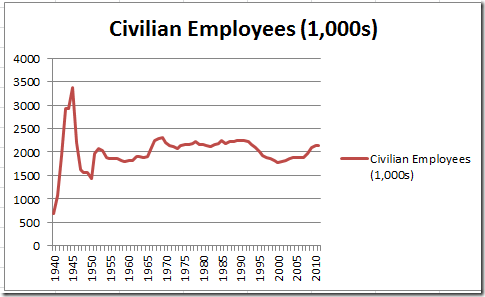 Of course, the initial fluctuation is clearly linked to WII, but after that event the overall level of civilians employed by the executive branch (the largest part of the federal government by far) has stayed within a range hovering around 2 million for many, many decades.

There are two points of consequence that I think are significant.

1.  Contrary to a prevailing narrative, government (at least by this metric) has not radically grown of late.  Indeed, while there has been a slight uptick in the last several years, the size of the government in this area is only slightly above both the seven decade average (2.02 million) and the median (2.06 million).

2.  As a function of population, the relative size of government is actually smaller now than it was after the WWII era explosion took place (and receded).  Consider:  in 1950 there were 1.98 million civilian employees in the executive branch and the national population was 161 million.  In 2011 the employee count was 2.15 million for a population of over 300 million.  Therefore, relative to the population, the government is actually far smaller now than it was in 1950.

Now, this is just one metric of the size of government, but it is interesting to note that despite the narrative of uncontrolled growth, on this measure the government can be seen to be either relatively steady (in absolute terms) or actually smaller (in terms of employees as a function of the US population).

Now, certainly, this tells us nothing about whether this is a good (or bad) level of employment.

For kicks, here’s total federal employment, including the military and the legislative and judicial branches from 1962-2011 (source): 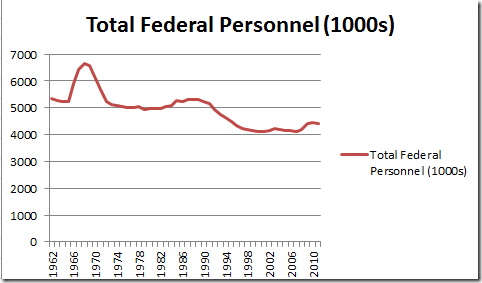 The overall trend is downward, especially from its Viet Nam era peak.  Interestingly, there is also a general downward trend from the late 1980s until the mid-2000s, with an uptick in recent years.  The average for the range is question is 4.94 million (and the median is 5.00 million).  The 2011 figure is 4.40 million, substantially below the average and the median.

*One thing this interchange reminded me: it is impossible to actually discuss anything over Twitter.