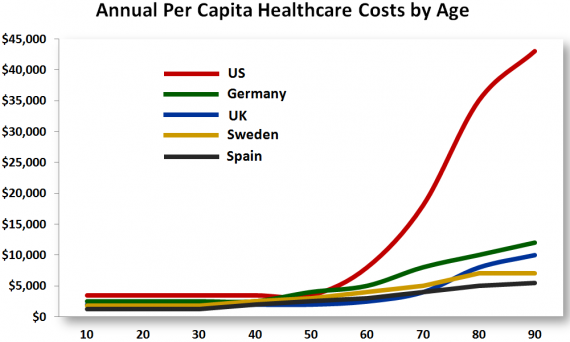 Yesterday in the comments of this post of Steven Taylor’s, “What’s Wrong With This Picture?”, I mentioned a bar chart comparing healthcare costs in a number of developed economies over at my place. Above, courtesy of a frequent commenter there and here, is an alternative representation of the information, sampled from an article at Forbes.

As you can see, one of these is not like the others and drastically so. There are multiple reasons the difference could be explained including

I presume there are other explanations. I think it’s a combination of factors, leaning heavily to the second and last.

Whatever the underlying reason, it’s a graphic depiction of the point made in Steven’s post. What’s wrong with this picture?

The NYT On Healthcare