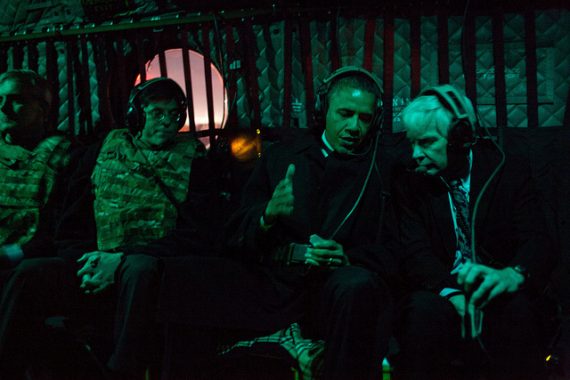 First: jd – “Shouldn’t we activate the Cone of Silence?” “What?”

Second: Doug Mataconis – “We’re flying in secretly to see if we can catch the Secret Service at a strip club again.”

Third: walt moffett – I’ll let you know when its your turn to sit by the window.

Kevin Whalen – “This is my favorite Jay Z song right here. I love the shuffle feature!”

JKB – Don’t ask but do tell. Is that guy over there eying me?

Maggie Mama – The AF managed to locate green light bulbs for all our planes, so it’s no longer referred to as black ops.

“Whatever you do… don’t wear a hoodie… they’ll cap your ass….”

“Do we really need these precautions?”
“Detroit’s just not safe, Sir.”

Crocker: “So Bin Ladin’s dead, and GM is still alive.”
Obama: “At least until after the election.”

They’ve just got to get a better in flight movie than “Driving Miss Daisy.”

The Monday Contest already has cornered the market on all the crops in Farmville.