The Sky Diving for Schmucks Edition OTB Caption ContestTM is now over.

The Sky Diving for Schmucks Edition OTB Caption ContestTM is now over. 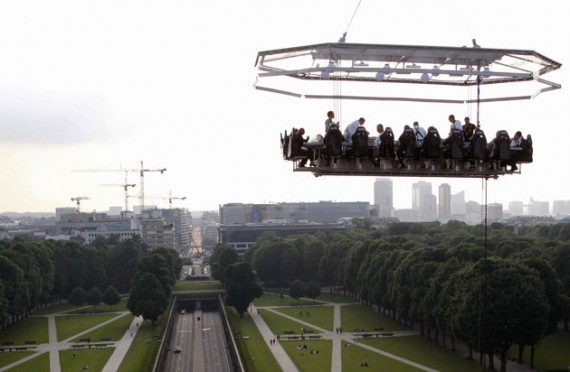 Second: Wyatt Earp – “Waiter, there’s a hawk in my soup.”

Third(tie): Daniel N. Adams – Wall Street waits in anticipation today as the Board of Directors at Super Glue Inc meet to elect a new CEO.

Third(tie): KRM – The annual meeting of Exhibitionists Anonymous got off to a flying start.

al-Ameda – “We can see Alaska from here”

FormerHostage – The business world’s version of the “kids table” at Thanksgiving.

MaggieMama – Apparently NASA is getting very, very creative in its search to replace the retired Shuttle program.

Robert W. Armijo – “Okay, the next one who cracks another Sarah Palin ‘I can see Russia from my house’ joke is getting tossed.”

“Dangle me over the East River… I need to take a dump.”

“…and Seamus thought he had it rough.”

The Monday Contest has already stretched his wings.