The Two and A Half Laughs Edition OTB Caption ContestTM is now over.

The Two and A Half Laughs Edition OTB Caption ContestTM is now over. 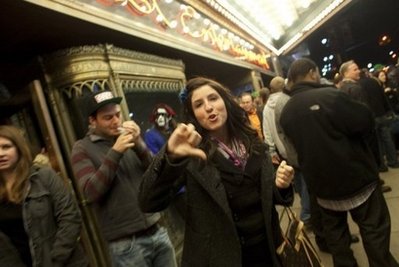 Second: MikeM_inMd – Outside the Exchange, a trader indicates the earnings trend of “tiger’s blood”.

Doug Mataconis – The audience reaction to President Obama’s re-election announcement was not what the White House had hoped for.

Maggie Mama – Higher education [at Rutger’s] “AIN’T WHAT IT USED TO BE”!

John425 – Audience reaction to CBS’ announcement that Charlie Sheen will be anchor replacement for Katie Couric.

MstrB – The worst day in the life of a flasher.

JKB – Barack Obama announce his run for re-election today. Not all reactions were positive.

ObamaGirl has a change of heart.

Two and a half, on a scale of one to ten.

The Thursday Contest is singing in the rain.