The Commode of Transportation Edition OTB Caption ContestTM is now over.

The Commode of Transportation Edition OTB Caption ContestTM is now over. 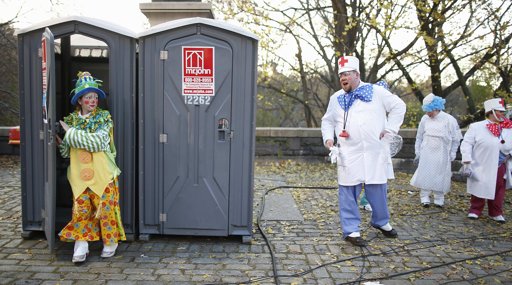 First: Steven L. Taylor – – “Colin Baker comes to the realization that he was punked by that invitation to participate in the 50th anniversary special.”

Second: Moosebreath – I liked this joke better when we all came out of a car.

Third: Al – “It’s just not the same since they let women be clowns. Back in my day all 18 of us could have used that at the same time!”

Vast Variety – Have you finished writing those Obamacare regs yet?

OzarkHillbilly – The 2nd part of the GOP’s “Repeal and Replace”.

“Well I just don’t give a sh*t

The new Doctor Who was on an even smaller budget.

Well in the olden days we used to use binders.

Looks like I took a wrong turn at Albuquerque.

The Monday Contest has already been flipped the bird.