The The Government's Giving Away Free Stuff Edition OTB Caption ContestTM is now over.

The The Government’s Giving Away Free Stuff Edition OTB Caption ContestTM is now over. 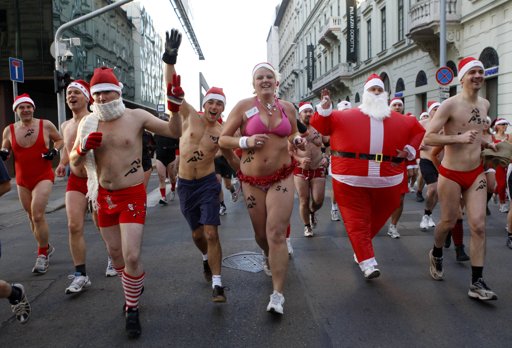 First: Robert W. Armijo – Due to a shortage of bulls this year, the city fathers of Pamplona decided to use a cheap and more plentiful substitute instead: Shopping Mall Santas

Second: Sejanus – The War on Christmas

David – After lower revenues, the A&F Winter Catalog didn’t quite live up to previous editions.

JKB – Inside every Santa there is a jogger trying to get out.

OzarkHillbilly – The Grinch is gonna get it now.

Drew – From the race organizer seats in the balcony, the finger pointing escalated concerning the recent amendment to eliminate the “full Santa Claus suit” clause in the marathon bylaws.

Hal 10000 – City officials were still mixed about Santa’s plan to personally run those on the naughty list out of town.

Donald sensing – ‘The Greatest Loser’s’ Black Friday edition failed to gain much of an audience.

I’m dreaming of a flight Christmas.

Mrs. Claus never did quite get the hang of not doing her whites with Santa’s stuff.

Elfess has left the building.

The Monday Contest is still trying to catch a cab.