The Head Of The Class Edition OTB Caption ContestTM is now over.

The Head Of The Class Edition OTB Caption ContestTM is now over. 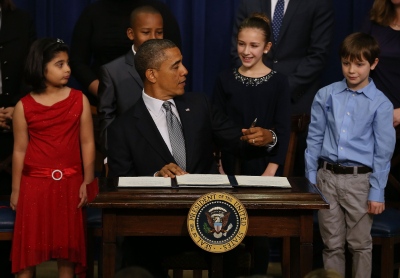 First: Allan Bourdius – “Where are their lab coats? I thought they’d all be wearing lab coats.”

Second: al-Ameda – “Next time we’re doing our photo-op on the deck of the USS Lincoln.”

Third: EdMigPer – Who ripped a good one?

KB – Can any of you guys tell me what exactly an assault rifle is?

Drew – Yes, sweetie, I got your letter to Santa Claus as well as the one on gun control……

Moosebreath – Yes, Jenny, I did have to overcome a lot of society’s ingrained prejudices. You see, I’m left handed.

C. Clavin – Hey, you look like a 5th grader…are you smarter than the NRA?

“If you think this is so easy you sign it.”

“I going as fast as I can. Don’t worry you’ll get plenty of time to caddy for me later.”

“Excuse me… It’s Obamacare, not Obamacabre.”

Tillman* – Later in Mindy’s life, the only thing she could recall about the occasion was the pattern of hair on the back of Barack Obama’s scalp.