The Arachnid The Kid Edition OTB Caption ContestTM is now over.

The Arachnid The Kid Edition OTB Caption ContestTM is now over. 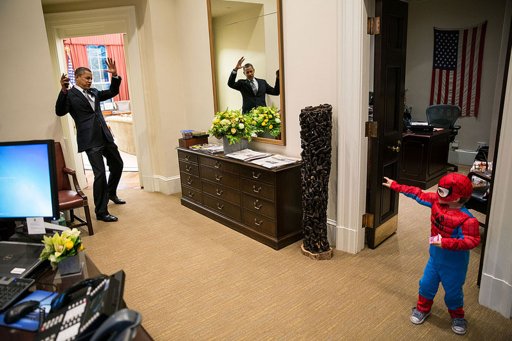 First: mantis – I’m sick of your inaction on the Mary Jane issue, Mr. President! (Double entendre for the… what was I saying… and does anybody have a bag of munchies – rodney)

Second: Mr. Prosser – The president’s staff misunderstood when he told them he wanted to participate in a webinar.

Third(tie): Kim – The web swinging was good, but the “Uncle Ben” line was harsh.

Third(tie): markm – Spiderkid “…you can ban all the weapons you want…..but you’ll have to pry my spider web shooter thingy from my cold dead hands!”

Allan Bourdius – “Why hasn’t the White House addressed my petition for the EPA to deal with radioactive spiders?!?”

John Burgess – “Oh, I see the Secret Service was busy with hookers again…”

aquanerd – Republicans go for broke with their secret weapon!

“…but why don’t you attack Pelosi?”
“Professional courtesy.”

Cuomo immediately went on a rant that a spider would never need more than 10 spinnerets.

Spiderman: “You’re back…. I threw you over the Fiscal Cliff…”
Obama: “…but, Obumbles bounce.”

Oh what a tangled web we weave, for more taxes we wish to receive.

Spiderman subdues the Obamaton, unaware of what his enemy’s sidekick, MalarkyMan, has planned for him.