The May The spouse Be With You Edition OTB Caption ContestTM is now over.

The May The spouse Be With You Edition OTB Caption ContestTM is now over. 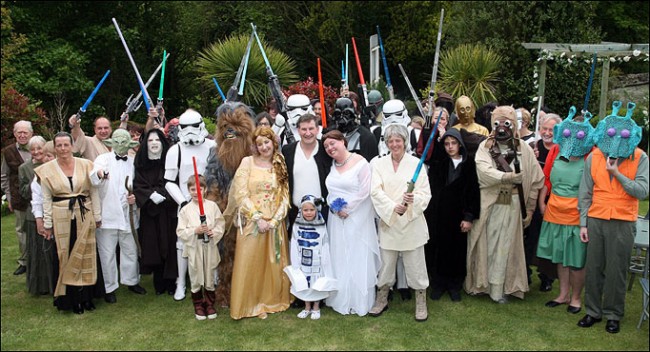 First: Moosebreath – Usher: Will you be sitting on the light side or the dark side?

Second: fustian – Jar-Jar Binks was invited, but he thought the whole thing sounded too silly.

Robert W. Armijo – At first, Han Solo thought he was the luckiest guy in the galaxy for marrying Leia. Especially when she confessed she planned to wear, later that night exclusively for him, the very same golden bikini she wore as Jabba the Hutt’s slave girl aboard his barge in Star Wars, Episode VI: Return of the Jedi. Unfortunately, Leia also confessed that she had an affair with Jabba and that his junk was substantially bigger.

jd – Sure, the weddings are fun and all, but the Chalmun’s Cantina Band plays at every… single… reception.

He who must not be named – I find all of you… disturbing.

I find your lack of lace disturbing

Luke, I am your best man…

If I told you, you had a celestial body… would you hold it against me.

If the groom gets the kessel runs for 12 parsecs from the brides cooking is it grounds for divorce.

These are not the brides you’re looking for…