The Tanks For The Mammaries Edition OTB Caption ContestTM is now over.

The Tanks For The Mammaries Edition OTB Caption ContestTM is now over. 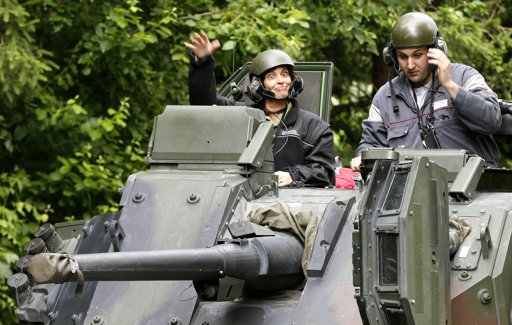 First: Allan Bourdius – “Where have you gone, Michael Dukakis? A nation turns its lonely eyes to you – woo, woo, woo”

Second: He who must not be named says – Be vewy quiet, I’m hunting cwimate deniawists. Heh, heh, heh, heh.

Third: Donald Sensing – “Boy, am I happy I passed the background check!”

al-Ameda – “Which way to the Rose Parade?”

John Burgess – “Does this make my ass look big? Or just make me look like a big ass?”

Hal 10000 – Why, no, we’re not smuggling Edward Snowden under the floorboards. Of course not, haha!

Paul Hooson – One general says to the other: “So, how’s that all volunteer army working out…”

The only episode of ‘Glee’ I ever liked.

The Thursday Contest is looking for a Pineapple under the sea.