The I'll Have A Fifth Law Of Robotics Edition OTB Caption ContestTM is now over.

The I’ll Have A Fifth Law Of Robotics Edition OTB Caption ContestTM is now over. 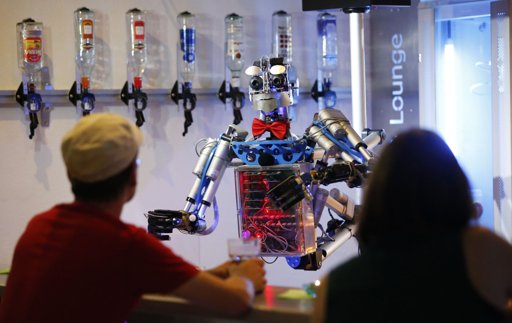 First: Mu – Returning to Tantooine, Luke realized the bar had been drastically redecorated.

Second: Pinky – “Sure thing, buddy, one draft coming up! Say, you haven’t happened to run into anyone named Sarah Connor tonight, have you?”

Third(tie): Allan Bourdius – “They heard the hum of the motors, they counted the rotors, and waited for us to arrive…and we would all go down together.”

Third(tie): Patrick McCain – Weiner to Huma: “I call this techs-ting.”

John D’Geek – The ‘Mysterious They’ finally create the perfect politician …

Moosebreath – I recommend a 30 weight as a chaser, sir.

Tillman – “Jim Beam? Error. Error. My programming prevents me from serving you poison.”

He who must not be named – Patron (conveniently named Dave): “Open the bottle, pal.” Bartender: “I’m sorry Dave, I’m afraid I can’t do that.”

“I’m a Cathodelic… Of course I believe in a higher deity…. IBM’s Watson.”

Patron: “I keep meeting girls that are bi-polar.” Robot: “That’s nothin’ mine are all bi-nary.”

“Can you play ‘I ain’t got Nobody’ by Spencer and Graham?” “Very funny human… very funny… ”

The Monday Contest has ready converted.