The In Your Cups Edition OTB Caption ContestTM is now over.

The In Your Cups Edition OTB Caption ContestTM is now over. 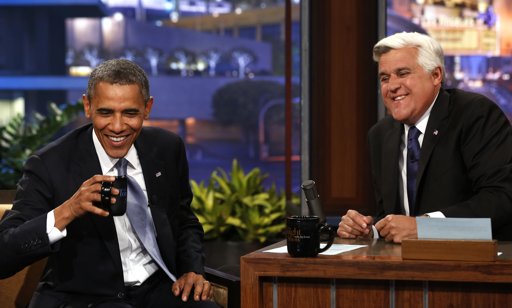 First: markm – President: “…what the…JAY, you tricky man…..is that a surveillance device on my coffee cup?”

Third: Wyatt Earp – With no teleprompter available, Obama staffers use Alpha-Bits to feed the president his lines.

Pinky – “Don’t worry about it. I was lousy at my job and they invited me back, too.”

JWH – One of these men is one of the most powerful men in America. The other one is the president.

Lynda – Your next guest is Putin? Here, let me leave a little present for him in his coffee…

Obama: “…and I brought along Pelosi and Reid for Stupid Pet Tricks…”
Leno: “…Uh… that’s Letterman”

The Monday Contest finds your lack of faith disturbing.