The Matriculate Your Way Into Syria Edition OTB Caption ContestTM is now over.

The Matriculate Your Way Into Syria Edition OTB Caption ContestTM is now over. 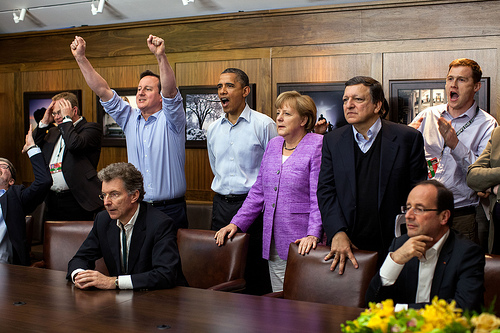 First: Tony W – By all accounts Hillary’s first mud-wrestling match was a hit

Second: David in KC – Who won the over under on Britian’s Syria vote? That guy.

Third: John Burgess – “I told you the sombrero was going to win!”

He who must not be named – The five stages of the G20: anger, denial, bargaining, depression and acceptance.

John425 – Merkel thought bubble: “All this joy just because a rodeo clown got fired?

Eric Florack – Look, how the hell are we supposed to fight world terrorism, when we cant even get a good wave going?

Pharoah Narim – To inject some energy into his meeting with world leaders…the President hosts a re-viewing of his final debate with Mitt Romney.

Merkel: “OMG, I thought you weren’t going to put boots on the ground in Syria.”
Obama: “That’s not war… that’s just the first NFL game of the season.”

The fight scene at the end of Blazing Saddles always brought them to their feet.

The Thursday Contest is still looking for the carpenter.