The Night Recap Edition OTB Caption ContestTM is now over.

The Night Recap Edition OTB Caption ContestTM is now over. 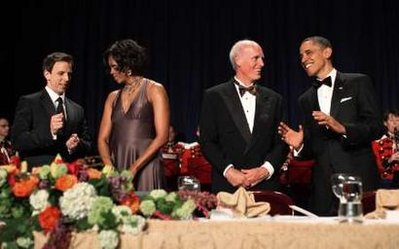 First: Mr. Prosser – Did you all see how Trump’s hair went all wild when we hit him with the birther jokes?

Robert W. Armijo – “Stop me if you heard this one before. But I don’t think you have. Not yet: You see, these Navy SEALs enter a compound in Pakistan…”

Vast Variety – I once caught a fish this big.

Peterh – That’s a good question…you see…when I’m around women and my hands are open…lets just say, I should keep them closed…

How about a big sign that says “Mission Accomplished”

No Mrs. Obama I didn’t take your pudding, maybe you should check someone else for ‘pudding face.’

The Thursday Contest has already found the frequency.