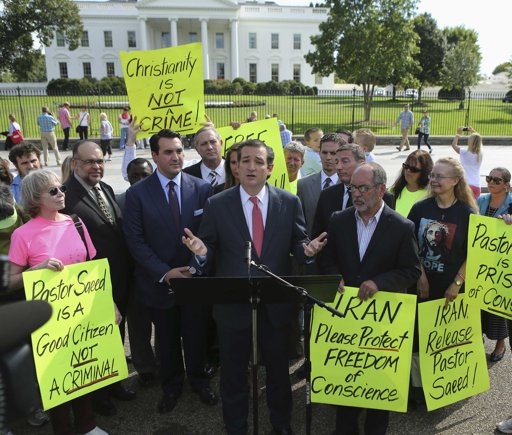 Hal 10000 – I’m begging you, America. Make me President so I don’t have to deal with these common folk anymore.

He who must not be named – By hour fifteen only the truly committed remained.

Pharoah Narim – Dearly beloved I say unto thee: I used literally ALL of my miracle-working power descending from Heaven to stand before you behind this podium. Therefore, I do not intend to do anything about this Pastor Sneed character you seem to think I give two flips about other than the photo op this provides my campaign. Sneed is hosed….. eff him. Cruz out.

Tillman – “I got nothing guys. I looked at the evidence; Christianity is clearly a crime in Iran. Protesting my daily preaching to the grass won’t change anything.”

Mu – “Yes, I’m going to a breast cancer awareness meeting after this, why do you ask?”

“I don’t want to shut down the government, just more place it on Cruz control”

The Senate is failing to address the Tweepadock in the room.