The Laid Bear Edition OTB Caption ContestTM is now over.

The Laid Bear Edition OTB Caption ContestTM is now over. 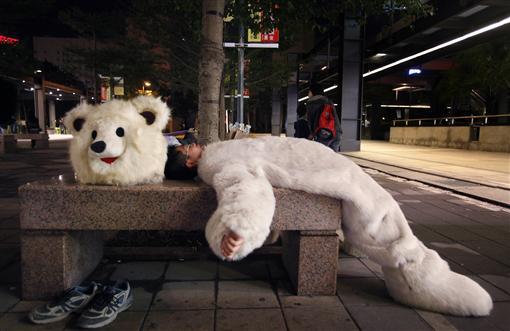 A lot of great captions in this contest, Some are honored below

Second: David in KC – When he said “$7.50 an hour for this crap job, someone please shoot me” he didn’t know someone was going to take him up on it.

Third: Pinky – When the head came off, the traumatized children realized that it wasn’t a pinata, but a college mascot who had hung himself.

OzarkHillbilly – I know global warming is a real and serious problem but that’s no reason to lose one’s head over it!

Moosebreath – The patient is prepped for Doc McStuffins.

Allan Bourdius – Hugging every new Nissan Leaf owner is exhausting, even if there are only a few dozen of them.

He who must not be named – Man-bear-hey, where’s the pig?

John425 – Anthony Wiener (aka Carlos Danger) tries a new way to reinvent himself.

Paul Hooson – “What would you do for a Klondike Bar?”

JWH – Emil takes a break while filming The Fast and the Furry-ous.

JKB – Sacrifice on the Altar of Gore

Edna never really grasped why PETA was so concerned and cluelessly continued to go clubbing with baby seals.

In the wild the Bi-Polar Bears are found to be only slightly less apathetic than the Honey Badger.

Some poses just aren’t meant to be Kodiak moments.

The Thursday Contest has already been Putin on the Ritz.