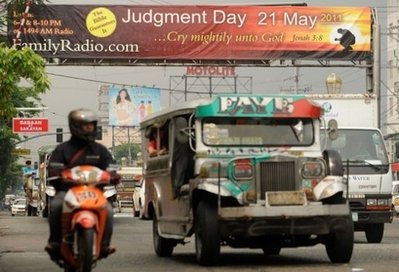 Third: FormerHostage – Kinda like the finale of American Idol but on a more cosmic scale.

Maggie Mama – Judgment Day has come and gone, but daily traffic proves yet again to be a “living hell”.

Mr. Prosser – “There is a theory which states that if ever anyone discovers exactly what the Universe is for and why it is here, it will instantly disappear and be replaced by something even more bizarre and inexplicable. There is another which states that this has already happened.” – Douglas Adams, from The Restaurant at the End of the Universe

Talmadge East – “Obama’s new ride after the last one got hung up in Ireland.”

The good news was that everyone that accepted ObamaCare without obtaining a waiver went to Heaven, the bad news is that they all fit on one bus.

The Monday Contest is already on the prowl.