The Just When You Thought It Was Safe To Go Back In The Water Edition OTB Caption ContestTM is now over.

The Just When You Thought It Was Safe To Go Back In The Water Edition OTB Caption ContestTM is now over. 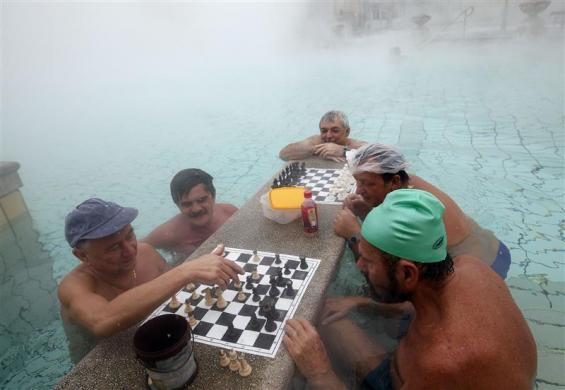 Second: Franklin – Eastern European understanding and cooperation is the goal of the monthly social gathering “Checkmates with our Czech Mates”

Third: Pinky – A hidden camera in Sochi’s most popular bathhouse reveals that there really are no gays in the city.

OzarkHillbilly – FOOL! You can’t move the Rubber Ducky like that!

He who must not be named – You sunk my battleship!

Mu – As popular as spa chess was with the players, the viewers’ reaction lead NBC to vote against it as being raised from demonstration sport to full Olympic event.

al-Ameda – Remember when there used to be American football

C. Clavin – Oooh…I like it when you take my Bishop…

Obama signed an executive order… and here we are…

With ‘Oceans 17’ the theme finally jumped the shark.

There are no submarines in chess… so stop yelling ‘EMERGENCY BLOW.’