The Reviewing the Situation Edition OTB Caption ContestTM is now over.

The Reviewing the Situation Edition OTB Caption ContestTM is now over. 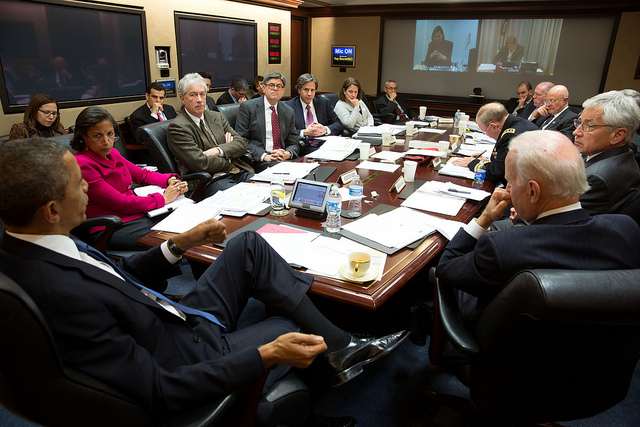 First: OzarkHillbilly – All in favor of giving Kathleen a farewell party?

Second: John425 – The President: “So, it’s agreed that I will tell Putin that if he likes his Crimea, he can keep his Crimea.”

Third(tie): markm – “aaand…..who advised me to pick Michigan State to win the tournament….”

Third(tie): Tillman – Obama sighed to himself. This is the worst game of Hollywood Squares ever, he thought sullenly.(It’s never been the same since Paul Lynde passed – rodney)

Donald Sensing – “All right, Hagel, you call Vladimir Putin and find out whether Russia will invade the Bundy ranch for us.”

Allan Bourdius – General Martin E. Dempsey: “Clowns to the left of me, jokers to the right, here I am stuck in the middle with you.”

RockThisTown – “Susan, now that we’re backing off Bundy in Nevada, can we blame it on a video? And make sure we still funnel some cash to Harry Reid.”

edmondo – The two dozen people in America who actually think ObamaCare is a good idea get together to read the bill.

Robert W. Armijo – “I was pulling up to the 18th hole when a squirrel jumps out in front of me. And that’s when I swerved to the right and ran over Biden here. I was so worried. But as it turned out, the squirrel was okay.”

Paul Hooson – The Chairman of the bored…

“OK, So all in favor of putting Vladimir Putin in Double Secret Probation?”