The Laughing Gas Edition OTB Caption ContestTM is now over.

The Laughing Gas Edition OTB Caption ContestTM is now over. 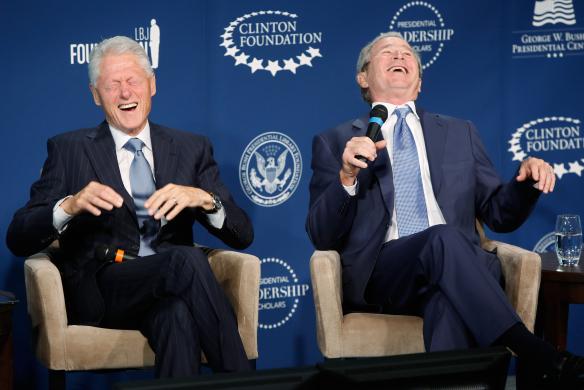 First: CSK – “We call ourselves ‘The Aristocrats.'”

Third(tie): Jeremy – “So then I started reading the comments at Outside the Beltway…”

Doug Mataconis – “And then I told him ‘Barack, have fun with the job, I’m sure you’ll do as well as I did'”

Franklin – Remember when Gore wanted to be President?

Mu – “For the inauguration, I gave Barack a box of cigars, and Michelle a guillotine cigar cutter”

al-Ameda – “Wisdom of the People?”

“Heck of a job, Brownie”
“…depends on what the definition of is is”
“Mission Accomplished…”
“I did not have sex with that woman….”

Waldorf and Statler proclaim “The Frog and Pig have had it” when asked about Obama and the first lady in the polls.

Clinton and Cheney always crack up when singing the Cheney song….
♬
Oil land for lease or rent,
Haliburton’s money spent,
No more Veep perks to get,
No C-I-A secrets,
Ah, but 8 years Iraq war gloom,
left a Capitol with out no room,
for a man, thats mean and more mean
Dick of the Road!!!!
♬