The Never Up, Never In Edition OTB Caption ContestTM is now over.

The Never Up, Never In Edition OTB Caption ContestTM is now over. 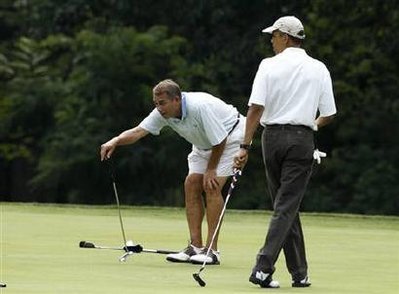 First: Drew – You misread it, Mr. President, it breaks to the right, not the left.

Second: Herb – As Boehner doubles over in tears, Obama soothes him, “It’s alright, John. It’s just a missed putt, not the end of the world.”

MstrB – I think I just got a boehner.

Robert w. Armijo – “I don’t mean to rush you, Mr. Speaker. But, um, Nancy Pelosi just asked if she could play through.”

Lgbpop – You just stand still, Mr. Speaker, – just like that! – and I’ll show you my plan for the American economy.

John Burgess – Boehner: “Yep, you drained it. The economy, that is. Too bad about the putt.”

Talmadge East – Mr. President, I think that damn gopher got my ball again.

Michael Hamm – Obama: My putter is longer than yours.

Boehner: “Damn… How do you get all these greens to break to the left.”

Don’t worry, I left Biden in charge while we golf.

Obama: “Weiner’s out then.”
Boehner: “What? You didn’t make it passed the ladies’ tees?”