The The Rathaus Pack Edition OTB Caption ContestTM is now over.

The The Rathaus Pack Edition OTB Caption ContestTM is now over. 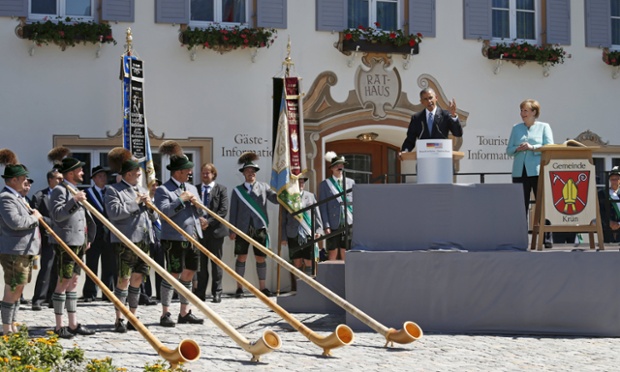 Second: Franklin – They warned us that Obama was the Antichrist. And sure enough, there are the Four Hornsmen of the Apocalypse!

Third: Tony W – Obama then advised them to go ahead and inhale.

Mu – The Republican response to Obama’s “state of the G7 nations” speech was unorthodox.

Doug Mataconis – “Okay guys. On the count of three, you’re gonna blow those horns while I yell “Ricola!”

Pinky – The President’s sign language interpreters are getting weirder every time.

al-Ameda – … in America we call them ‘crack pipes’

OzarkHillbilly – “Can you guys play ‘A taste of Honey’? I really like that one.”( I’m more partial to ‘The Tijuana Taxi’ – rodney)

“Sorry, 15 Schnitzengruben is my limit.”