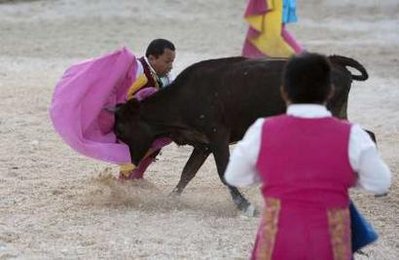 First: physics geek – You realize, of course, that this means war.

Second: Drew – With the NFL lockout still on, attempts to organize non-santioned lineman drills have had some problems.

markm – In yet another visible fracture from within the Democratic party, Barack Obama takes one from Al Gore for his failure to act on ClimateChangey.

Drew – Look, Elsie, we’ve got to dry you off after your bath…”

John Burgess – This is absolutely the last time I’m letting Michelle dress me!

With these horns, if you don’t C-Sharp you’ll B-flat.

It was inevitable that eventually dwarf tossing and bull fighting would be combined.

Everytime you beat the bull you have one ‘Dislike’ vote removed.

The Thursday Contest is already counting down to the return of the OTB Caption Contest.