The Zuckers On The Line Edition OTB Caption ContestTM is now over.

The Zuckers On The Line Edition OTB Caption ContestTM is now over. 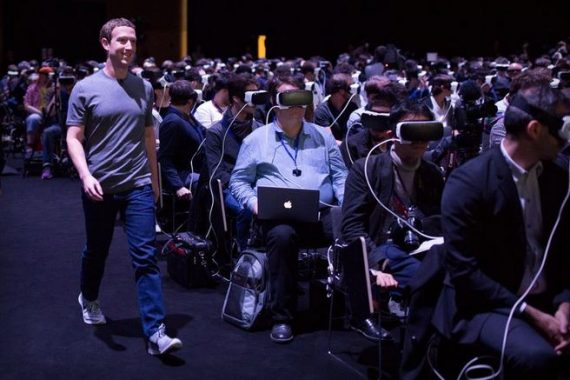 First: Moctavius – In the land of VR headset wearing nerds, the man looking at reality is king.

Second: Hal_10000 – After testing a reality in which Trump is President, half the Beta testers hung themselves with their own VR gear.

Mu – The crazy thing, they’re lining up to beta test the Matrix.

RockThisTown – “How cool is this . . . blinding everyone into giving me their personal information!”

Franklin – Since childhood, Tom looked forward to someday being able to see people naked with x-ray goggles. And when the big moment finally arrived, he was blinded by Mark Zuckerberg’s fiddly bits in his face.

Paul Hooson – Suppose you went to a STAR TREK convention and everyone came dressed as Captain Pike?

Extensive VR Testing was required for the next Oscars for the Academy to see the appropriate number of minorities nominated.

Later it was found that stoners moving away Colorado needed to be extensively prepped for reality.

The only way to view a civil GOP Presidential debate.