The Wassamatta U Edition OTB Caption ContestTM is now over.

The Wassamatta U Edition OTB Caption ContestTM is now over. 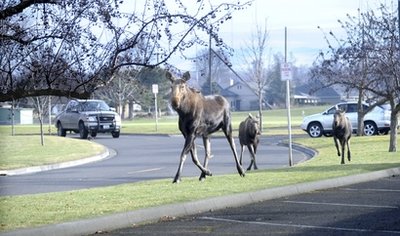 Third: charles austin – And now, here’s something we hope you’ll really like!

Michael Hamm – Democrats realize that a Jackass isn’t big enough to represent their Party, so they are upscaling to a moose.

Mr. Prosser – After drinking the radioactive Pennsylvania water the squirrels took on some radical changes.

John425 – They walk around like they own the place.

Debbie Moss – Can we use the HOV lane under the “Ultra Low Emission Vehicle” exemption?

chsw – Scientists at the University of East Anglia blame man-made global warming for the southward extension of moose habitat. These moose are in DC.

Obama: “How did I get this black eye? I told Michelle I could see Palin’s Northern Exposure from the Oval Office.”

Sarah Palin: “Damn, is it my turn to make dinner again?”

The Thursday Contest executed the rest of the Blue Man Group.