The I Fart In Your General Direction Edition OTB Caption ContestTM is now over.

The I Fart In Your General Direction Edition OTB Caption ContestTM is now over. 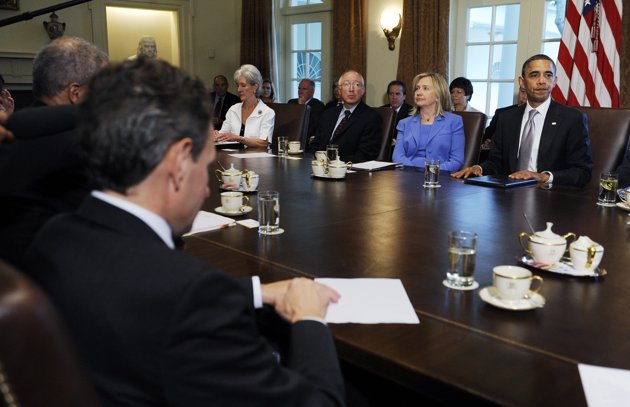 First: Rob in CT – Geithner: This paper airplane is gonna be totally sweet.

Second: charles austin – Without the teleprompter the President was unable to open the meeting.

Third(tie): John425 – Obama: “So here’s my official position…spending will increase until the deficit improves”

Third(tie): Mr. Prosser – I didn’t hear a “harrumph” out of you, Geithner, that man gets no paddle ball.

MstrB – Anyone else have a Boehner problem too?

HolyJuan – Hilary’s reach is almost as long as Bill’s.

Robert W. Armijo – “Okay, everybody. You know the routine. Turnover your mobile phones to me…Hillary, here, just got another so-called ‘Weiner’ text from somewhere inside this room.”

The round failed as both Hillary and Barack forget the words to “Row Row Row Your Boat.”

None of us are as dumb as all of us.

We won’t be satisfied, until you’re not satisfied.

The Monday Contest has already bitten off more than it can chew.