The Do You Have Any Grey Poupon? Edition OTB Caption ContestTM is now over.

The Do You Have Any Grey Poupon? Edition OTB Caption ContestTM is now over. 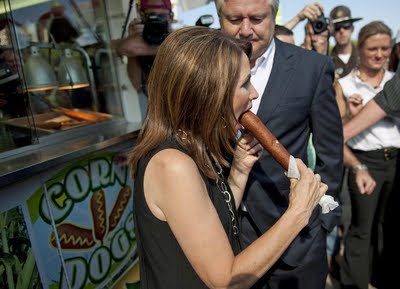 First: john personna – “The defining political issue of our time.”

Stormy Dragon – From Saturday, photos of the big Wiener in Iowa.

PogueMahone – I’m told my husband is better at this than I am.

Michael Hamm – Still no comparison to what Obama has done to the country.

Scott O. – Excuse me while I ram this down my throat.

Maggie Mama – Regarding my capability to campaign successfully against Obama, don’t tell me I don’t know how to handle that prick.

Robert W. Armijo – As disturbing as this photo is of Michele Bachmann biting down on a phallic symbol, it is nothing compared to the one of her licking the “Butter Cow”.

Next, I’ll drink your Milkshake.

It seems like an odd way to pray, but that corndog looks completely straight now.

Moving up in the polls poles

The Thursday Contest is letting the chips fall where they may.