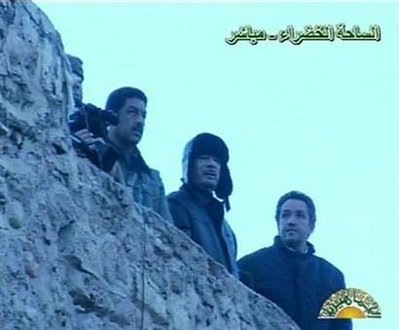 First(tie): charles austin – Excuse me boys, it’s 3 AM in Washington and I have a phone call to make.

First(tie): Eddie – You guys hear about Charlie Sheen? Dude’s gone crazy! It must suck to be insane. Yes, yes release the attack copters.

Second: JKB – Gadaffi: I am wearing this hat because I am one with my brothers and sisters in Wisconsin

Third: Maggie Mama – Nah, we have nothing to worry about from Obama; he’ll be ‘monitoring’ the situation for at least another six weeks.

JazzShaw – Yes! Reminds me of when my brothers and I would build play forts as children. Good times. Of course, I eventually had to have them executed as well.

Aaron Gee – People of Libya, this hat belonged to Adonis & I have tigerblood running through my veins that is why you love me.

Neil Hudelson – I fart in your general direction!

Michael Hamm – Do you like my hat? I think it makes me look sexy.

“OK, How ’bout camels with frickin’ lasers on their heads….”

“I have this sudden urge to go ice fishing, and I don’t even know what that is, ya der hey.”

“Are our plans to invade Escanaba all set.”

The Monday Contest is ready for a Livingston Saturday Night.