The Sucker Punch Edition OTB Caption ContestTM is now over.

The Sucker Punch Edition OTB Caption ContestTM is now over. 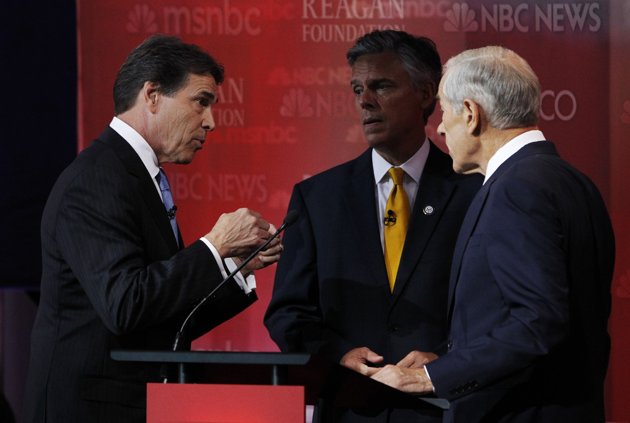 First: Doug Mataconis – Perry: “So then, you take the needle filled with Gardisil and…………”

Second: MstrB – No, you put the lime IN the coconut.

charles austin – I’ve got a penny in one of my hands, whichever one of you picks it can be my vice president.

Neil Hudelson – “Oh God D*mn, how am I losing to these guys?”

NickNot – OMG, I think he seriously believes what he is saying…

OzarkHillbilly – John Huntsman, a man in the shadow of greatness.

John425 – Huntsman thought bubble: “They never told me I’d have to campaign against real men!”

Maggie Mama – After each answer I give, I knuckle tap myself to keep my confidence high.

Along with Michelle Bachman — Almond Joy, Baby Ruth, and Snickers were invited to attend.

The candidates play a game of Crock, Paper, Scissors

Try as they might, they just couldn’t sing the right lyrics to Louie, Louie.

The Monday Contest is already arguing with the teleprompter.