The Ask Not For Whom The Bell Tolls Edition OTB Caption ContestTM is now over.

The Ask Not For Whom The Bell Tolls Edition OTB Caption ContestTM is now over. 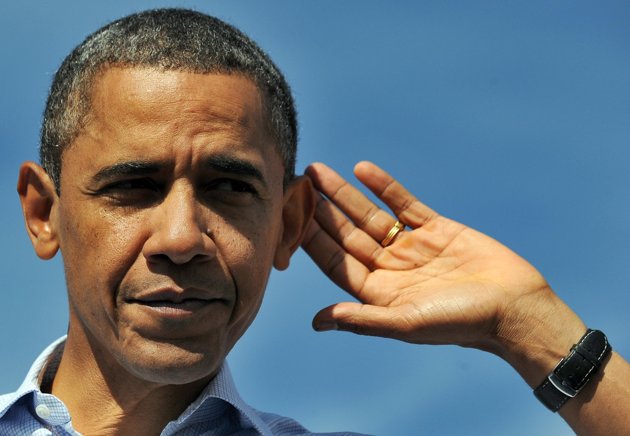 First: Doug Mataconis – I can hear November 2012 from my house.

Second: charles austin – I could hear you better if you were standing on a bundled stack of campaign contributions.

Third: anjin-san – “All these Republican dweebs don’t realize that I can’t hear them because the ACORN chip in my head is giving me instructions…”

John425 – “Wait a minute, my teleprompter is trying to tell me something.”

Maggie Mama – You may think I’m listening to you but I’m just checking the wind velocity before my next golf shot.

Mr. Prosser – Republican leaders and candidates are trying to say something rational. Hear anything? I don’t either.

Matt Young – They used to be this big until I had surgery.

Robert W. Armijo – Obama listens for the return of his supporters from the 2008 election campaign: “Wait for it…Wait for it…”

“I’ll listen to you when goats roost in trees… wazzat?”

The Schlock heard ’round the world.

The Monday Contest has already played its biggest trick.