The Turkey Roast Edition OTB Caption ContestTM is now over.

The Turkey Roast Edition OTB Caption ContestTM is now over. 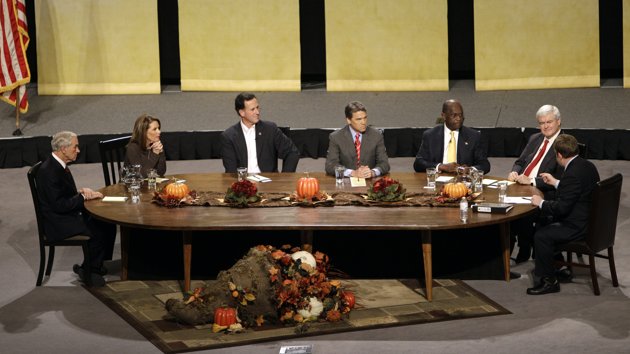 First: jd – OK, this how it works. We get up, the music starts and they take away a chair…

Second: Robert W. Armijo – Finally, Franklin is seated on the same side of Charlie Brown’s Thanksgiving Day table as everybody else.

ozarkHillbilly – Somebody give me a fork, I want to see which of these turkey’s is most done.

JKB – Hey, Newt, say something crazy so we can go after you.

Stormy Dragon – Even though it aired only once, the Not-Romney Holiday Special was such a notorious disaster that it developed a cult following and was passed around on bootleg tapes for years. (Nearly as big a following as Baracky Horror Picture Show – Rodney)

I like the remake of Emmet Otter’s Jug Band Christmas.

The Monday Contest is still dis putin the truth.