The ACME Paint By Numbers Edition OTB Caption ContestTM is now over.

The ACME Paint By Numbers Edition OTB Caption ContestTM is now over. 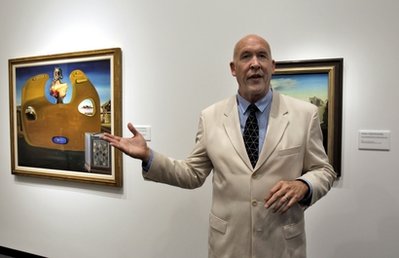 First: JazzShaw – It looked a lot more relevant once we painted over the roadrunner and the coyote.

Second: Michael Hamm – I have no idea of what this piece of art is to represent!

Third: John Burgess – “And here, we have the ‘Roadmap to Peace in the Middle East.'”

charles austin – And this is what finally convinced President Obama of the wisdom of a NFZ in Libya.

Kevin Whalen – Even during a recession people pay good money for this crap.

Maggie Mama – Here we see a modern interpretation of the artist’s view of America; no longer a bright “happy face” but rather a peaked “WTF look”.

John425 – I don’t know why this doctor keeps showing me these Rorschach tests. They’re nothin’ but a set of dirty pictures.

JazzShaw – You can’t actually bid on that, sir. It’s the lady’s room door.

…and this one was done by Charlie Sheen, it’s called WINNING

“…and this one is titled. ‘Eleventh letter of Greek Alphabet reclining.'”
“So that’s the Dali Lambda then?”
“No Mr. Pastis… and we would appreciate you stopping coming to our openings.”

The Monday Contest is already green with envy