The ACME Corporation Edition OTB Caption ContestTM is now over.

The ACME Corporation Edition OTB Caption ContestTM is now over. 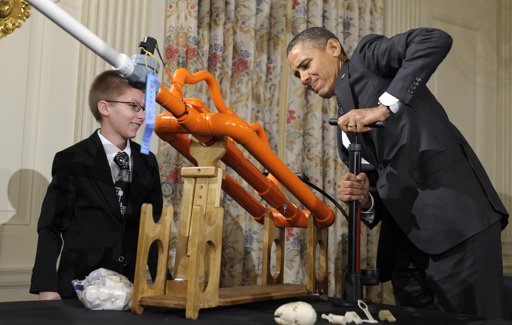 Second: Gollum – The demo was delayed briefly when the First Lady ran off with the “ammo bag.”

Third(tie): Neil Hudelson – Two more pumps here, then adjust the whosawatzit three notches, and that my friend is how you capture the Road Runner.

Third(tie): Brummagem Joe – Don’t let Boehner near this… he’ll shoot his eye out.

Greg Levitzki – So are you certain that this is a working model of Iran’s nuclear technology?

Brooke – This is not as easy as my penis pump.

john personna – I’m not sure how far we can cut the military budget but … let’s give it a shot.

Maggie Mama – I always knew kids were running the show.

Debitking – Ok kid, we will invest 500 million on this thing. But only because it’s air powered.

“…it only shoots marshmallows, Sir.”
“So if we want to attack the French, we’re all set then.”

Pumper? I don’t even know her.

The Monday Contest is already going Fast and Furious.