The election is tomorrow (except for the nearly one fifth of the electorate who’ve already voted) and the polls aren’t any clearer than they were six months ago.

The RealClear Politics average has it Bush 48.5%, Kerry 46.8%, Nader 0.8% (Bush +1.7) for an imaginary three way race. Given that Nader is not on the ballot in several key states, it’s probably slightly closer than that and, regardless, well within the margin of error. Almost all the head-to-head polls have Bush up slightly but within the margin: 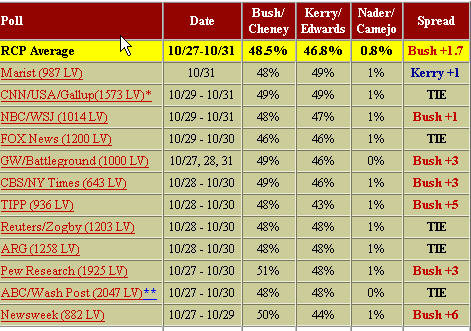 See RCP for links to each poll.

The state-by-state polls and resultant Electoral College projections are similarly sketchy with most of them showing both candidates short of the 270 Electors required. RCP’s collection of Battleground State Polls are all over the map in those critical contests. They show Bush with a 1.0% lead in Florida with polls ranging from an 8 point Bush lead to a 3 point Kerry lead; Kerry leading Ohio by 0.6% but almost entirely from a huge lead in the LAT poll; Kerry up 2.0% in Pennslyvania; Bush up 0.2% in Wisconsin but with no pattern in the individual polls; a tie in Iowa but with Bush slightly leading most of the polls; Bush winning New Mexico by 2.0%; Kerry leading New Hampshire by 1.3% but ahead in all polls; and Bush up 0.9% in Hawaii and leading in both polls. Several other “battlegrounds” are going comfortably to the party that won them in 2000.

For the first time since I’ve been following presidential races (1980-on) I have no real sense of how the election is going to come out. I knew 2000 was going to be fairly close, but thought Bush would win the popular vote by 2% or so and carry the Electoral College with reasonable comfort, even though I was nervous going in. This time, it could well be a relative Electoral College blowout for either candidate. As implausible as the Slate numbers are, they could be right. Similarly, it’s not at all conceivable that Michigan, Wisconsin, and even Pennsylvania could swing to Bush and create the appearance of a blowout even in a race Bush won by 2% nationally.

While I’m rooting for that to happen, my instinct is another squeaker with most close states following their 2000 pattern. I predict that Bush will win a plurality of the popular vote (Bush 49%, Kerry 48%, and Nader 1%) and carry the Electoral College 286-252.* 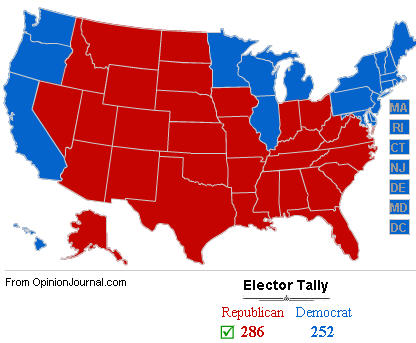 Bush will carry all the states he won in 2000 minus New Hampshire but pick up New Mexico and Iowa. (Coincidentally, this is the same result envisioned by Scott Elliot.) The magnitude of the win is increased because reapportionment added 8 Electors to Bush’s column and took them from the Democratic column if 2000 repeated itself exactly.

*Caveat: Based on the traditional formula of the plurality winner carrying all electoral votes in a state. The possible faithless Elector in West Virginia and the small chance of Colorado splitting their Electoral votes is not factored in.