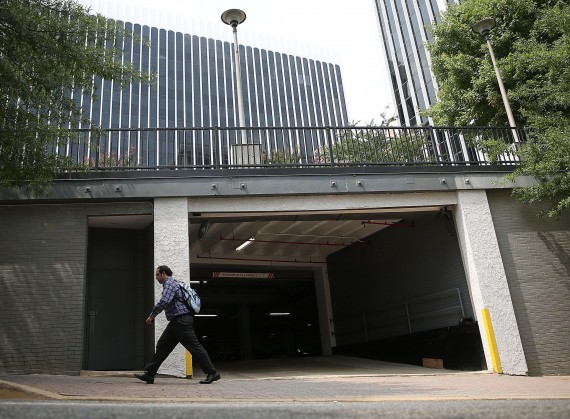 The parking garage where Bob Woodward met with a source that, for decades, was identified only as “Deep Throat,” will be torn down as part of a new development project:

One of the most historic journalism sites of the past half-century will soon vanish, following a decision by the Arlington County Board on Saturday to demolish the building and parking garage where FBI official Mark Felt secretly met with Washington Post reporter Bob Woodward during theWatergate investigation.

The County Board unanimously agreed to allow Monday Properties to replace its two 12-story, 1960s-era buildings at 1401 Wilson Blvd. in Rosslyn with a 28-story residential tower and a 24-story commercial building.

The parking garage beneath the existing building will be razed, although the county will save the historical marker it erected in 2011, and the landowner has pledged to create a commemorative memorial to the events that occurred there.

Parking spot 32D inside the ground-level garage is where Felt, who was dubbed “Deep Throat” by a Washington Post editor, provided Woodward with information that exposed the Nixon administration’s obstruction of the FBI’s Watergate investigation. Felt, then the second-highest official in the FBI, chose the garage as an anonymous, secure location and met with the little-known reporter in the dark of night six times between October 1972 and November 1973.

Actually, given the amount of development that has occurred in Arlington in the last 40 years, it’s  almost remarkable that we didn’t see this happen sooner.