Partisan Blinders on the Economy

Seems to me that there is quite a bit of partisan nonsense about the economy right now. 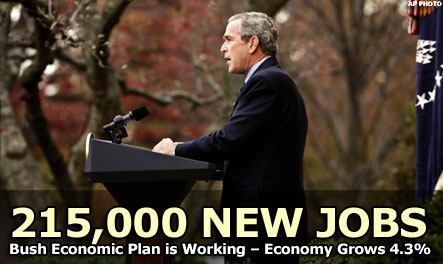 And it isn’t just from the GOP’s official website.

Is 215,000 jobs good? Well, sure it is better than 0 zero job growth in the non-farm payroll survey, and it sure beats the heck out of negative numbers, but it really isn’t all that great. Putting up a picture like that and making it out to be something grand is definitely the case of lowering the bar. For example, if we return to the days of Clinton, we’d see that on average the non-farm payroll increased by just under 240,000 jobs. Further, 68% of the 96 months Clinton was in office the non-farm payrolls growth was in excess of 200,000, 50% were in excess of 250,000 and 27% in excess of 300,000. Yes, yes, I know the tech bubble and all that. While there was definitely a bubble at the end of Clinton’s terms, I think one could argue there is a real estate bubble currently. So, if you want to discount the non-farm payroll numbers from the end of Clinton’s term, then discount these as well on the grounds of consistency.

Or better yet, lets not pretend that 215,000 is all that big a deal. Especially considering that the month before only 44,000 jobs were added and the month prior to that a paltry 17,000 jobs were added. Granted going back yet another month we’d see 277,000 jobs added, but the average over those 5 months is a disappointing 140,200 jobs per month.

And saying that prices for gasoline are dropping back to the pre-Katrina and we are “sitting pretty” levels is kind of like saying that things are looking great because instead of spending $25 to fill up your gas tank, now you spend $22.50! Ye-haw! With savings like that it’s going to be a good Christmas. Lets ignore that natural gas prices are still very high, likely to go higher, and this in turn will mean that electricity is more expensive as well.

And the audacity at the Republicans to put this in their press release,

The foundation for growth is strong. It’s based upon low taxes and restrained government spending, legal reform, incentives for saving and investment.–emphasis added

Kerrwhat?!?! Let me read that again. I think I’m going to have to call Bravo Sierra on the emphasized portion of that comment. Exactly what kinds of “restrained government spending” did President Bush have in mind? The black hole that is better known as the Sorta Free Drugs for Old People Medicare Program? Or is it the No Child Left Behind Program that has bloated federal educational spending to new heights?

We’re not going to rest until every American who wants a job can find one. We’re going to continue to work for good policies for our workers and our entrepreneurs. I’ll continue to push for pro-growth economic policies, all aimed at making sure every American can realize the American Dream.

Ahhh, nothing like big government Republicans who are going to take care of each and everyone of us. I just love a paternalistic state.

Update: Link to me will ya! Actually, Bryan brings up a couple of good points. First, I forgot about the horrible highway spending bill and the infamous bridge to nowhere. Then he also mentioned the free trade angle. Bush talks good on trade, but that is all it is, he is far more protectionist than Clinton. And, Bryan and I both forgot the energy bill, another pork laden piece of crap from the Bush Administration. The Bush Administration spends like a heroin addict with a serious jones.