Despite constantly hiring more examiners, the patent application backlog is 728,044 and it takes 6 years to get a decision.

Erik Sherman argues that “things are a disaster” at the U.S. Patent and Trademark Office.

Recent USPTO annual reports wouldn’t quite say just how big the backlog of unprocessed patent applications was. The office would talk about pendency — the amount of time it takes from when you file an application to when you have either a granted patent or a final no. And yet, officials insisted on counting reexamination requests, in which the applicant asked the office to reconsider a refusal, as completely separate applications, artificially lowering the real amount of time it might take to get a patent.

Now the USPTO has its data visualization center, with updated metrics. Kudos to [new director David] Kappos for doing something which should have been done long ago. People in any intellectual property-intense industry like high tech or pharmaceuticals have known that it took an eye-crossing amount of time to get patents. However, good lord, the numbers show how impossible the situation is there. Consider that recently the Department of Commerce, parent of the USPTO, has indicated that it wanted to see a 20 month real pendency. You could file a patent application and know in just over a year-and-a-half whether you were successful or not. Want a grim laugh? Look at these graphs from the USPTO web site (click on them for a larger view): 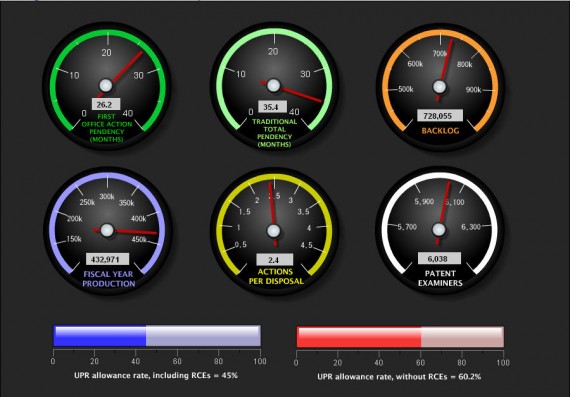 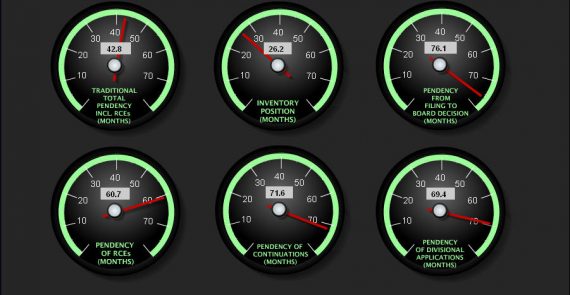 Under the old and deceiving definition of pendency, it would take an average of 35.4 months to get an answer on a patent application. The traditional pendency measure including RCEs as separate applications 42.8 months. The RCEs alone take over 5 years. However, if you look at the combination of initial applications and the continuations, the average pendency is 71.6 months. In other words, on the average it takes 6 years to get the final word on a patent application from the USPTO. If you appealed a decision to the Board of Patent Appeals and Interferences, it adds another six months to the process.

To put this in perspective, say that you had a child born on the same day you filed a patent application. By the time you got your answer, your kid would be well into first grade.

Backlog is now up to 728,044 patent applications. That’s with more than 6,000 patent examiners at work and the office processing 432,971 applications a year. How can this continue? Everything gets continually worse, year over year. The USPTO has continued to add examiners for a decade and the backlog has continued to grow.

Perhaps the answer is to drop technologies like software patents. By the time the six years have gone by, what you could have protected is likely already swept into industrial-sized dust bins. It’s particularly true of smaller companies, as a large-scale study found that high costs often deter companies from getting patents.

Who does that leave? Oracle (ORCL) suing Google (GOOG) for using open source Java, that was supposed to be available for everyone anyway? Apple (AAPL) suing HTC, or Nokia (NOK) suing Apple over who might be copying whom in handsets? Patents might have made business and economic sense when someone was capable of inventing the cotton gin or telephone. But given the thousands of patents on singularly insignificant features that can be involved in everyday devices and the amount of cross licensing necessary to engineer a new product, maybe it’s time to pull the plug and stop the madness.

I don’t have anything near the expertise to assess whether Sherman’s recommendation is the right one.  And my libertarian instincts don’t extend to thinking intellectual property shouldn’t have strong protection.   But the nature of software is such that six years is well beyond the useful life cycle of most products.  If the system can’t be scaled, it has to be rethunk.